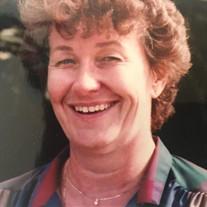 Ann Davis was born August 15, 1937 in Anaconda, Montana to John and Cecelia Kantack. She left this life on January 9, 2018 in Apple Valley, California. On January 17, 1956, Ann was united in marriage to James (Jim) Davis, also of Anaconda. They began their life together in California and soon settled down in Pomona. As their six children grew and became involved in sports and extra-curricular activities, Ann generously volunteered her time in support of many community organizations including Little League, Girl Scouts, St. Madeleine’s Catholic Church, Damien High School Boosters Club, and wherever else she could lend a hand with church and school events. If a kid needed a ride somewhere, she found room in the car. Ann shared her love of sports with her children and was a spirited cheerleader at all their events. Although competitive in nature, she instilled in her children the importance of being a good sport and doing their best. Ann welcomed everyone into her home and always made room for one more at the dinner table. Ann had many hobbies – sewing, knitting, and crafting, but she could also play the piano and sing like she was entertaining a dancehall. She was a spirited companion as she rode shotgun with Jim every summer on their annual trek to Montana, reconnecting with friends and family. She had compassion for children and a charitable heart, often helping those in need without hesitation. She set a powerful example of hard work, love and commitment. We will miss her infectious smile, witty sense of humor and fun spirit. Ann and Jim resided in Pomona until 1974, and then moved to Chino until 1999. Ann was an office administrator for Pomona Valley School District until she retired in 1995. Shortly thereafter, she and Jim moved to Apple Valley, making many friends at the Apple Valley Country Club and golfing until she was nearly 80. She is survived by her devoted and loving husband James (Jim) Davis of 62 years and her children Bill (Mindy) Davis, Jimmer (Debbie) Davis, Leanne (Bob) McKenzie, Carolyn (Mark) Hanson, Michael (Joanna) Davis and Patty Chandler (Scott Johnson). Ann was a loving grandmother to James and Hillary Davis; Eric and Scott Davis; Robert and Alan McKenzie; Brian and Matt Hanson; Michael and Linda Davis; Sydney Huegel, Carly and Lindsey Chandler; and great grandmother to Harper and Jayden. She had several extended family members including sisters-in-law Marilyn Paisley and Mitzi (Carter) Reul, and several nieces and nephews. Ann is preceded in death by her parents John and Cecelia Kantack, brother Rev. William E. Morley, sisters Judy Ryan and Mary Tyvand and her grandson, Scott Davis. 1A funeral Mass will be held on Friday, February 9, 2018, 10 a.m. at Holy Innocents Catholic Church, 13230 El Evado Rd., Victorville California 92392. Family and friends will gather for a "Celebration of Life" after mass in the Holy Innocents Hall at the same address. In lieu of flowers, donations can be made in loving memory of Ann Davis to www.Alz.org, or to your favorite charity

Ann Davis was born August 15, 1937 in Anaconda, Montana to John and Cecelia Kantack. She left this life on January 9, 2018 in Apple Valley, California. On January 17, 1956, Ann was united in marriage to James (Jim) Davis, also of Anaconda.... View Obituary & Service Information

The family of Ann Davis created this Life Tributes page to make it easy to share your memories.

Send flowers to the Davis family.