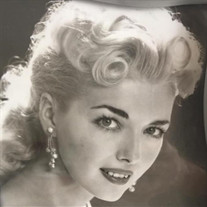 “All’s fair in love and war,” Allan Madvig said to Carolyn Smith on the roof of the ultra-modern W & J. Sloan furniture and décor building in Beverly Hills. It was 1954 and they both worked there, Carolyn as a cashier and Allan as builder of window displays. Glamorous Carolyn had caught the eye of this tall, handsome WWII veteran, and he had lunch with her in the cafeteria every chance he got. The problem was that Carolyn was engaged, set to marry the son of a prominent Culver City politician. But Allan was persistent, and had recently convinced her to go on a date to see Alfred Hitchcock’s “Dial M for Murder.” And here, on this rooftop, Carolyn changed her plans. She soon broke her engagement, and later that year married Allan at the Little Church of the West in Las Vegas on November 6, 1954. Thus began a 65-year relationship of always holding hands, two kids, relying on and supporting each other, trips to Hawaii and Europe, trout fishing in Kern River, home improvement projects, multiple moves and basically being inseparable. It sadly ended when Carolyn Madvig, 84, passed away in hospice at their home in Apple Valley, CA on January 2, 2020, surrounded by her family. Carolyn and Allan’s relationship was as romantic as any Hollywood movie, and the irony is that Carolyn was actually in movies, including with Elvis Presley (as Carolyn Carter) in the 1965 film “Harum Scarum.” Born in 1935 in Nashville, Tennessee, Carolyn’s family moved to Beverly Hills, CA in the 1940s to support her potential entertainment career (Carolyn’s aunt, actress Lucy Knoch, had a contract with Paramount and later appeared in the Oscar-winning MGM films the “The Bad and the Beautiful” (1952) and “Executive Suite” (1954)). As a child, Carolyn appeared in uncredited roles in movies such as “Without Reservations” with John Wayne (RKO, 1946), “Life With Father” with William Powell (Warner Bros., 1947), and “Mother Wore Tights” with Betty Grable (20th Century Fox, 1947). She attended the Hollywood Professional School and graduated from Beverly Hills High School, and worked at W. & J. Sloane while also working for the famous Central Casting, which booked the thousands of day players, bit parts, body doubles and extras needed for the film industry. The year after marrying Allan the couple had a child, Allan Madvig, Jr., and then settled in Canoga Park in the San Fernando Valley in 1956. Carolyn continued her entertainment career and Allan went into auto sales, working at Valley-area dealerships and Art Frost DeSoto-Plymouth in Culver City, CA. In 1965 Carolyn got the part in “Harum Scarum,” playing the beautiful heroine that Elvis’s character, actor Johnny Tyrone, saves from a group of bandits and a wild leopard in his latest action movie, “Sands of the Desert.” A few years later Carolyn expanded her role of mother when she and Allan had their daughter, Cynthia, while living in Calabasas, CA. While raising Allan, Jr. and Cindy, Carolyn worked in bit parts and as a stand in for now classic television shows such as “The Andy Griffith Show,” “I Dream of Jeannie,” “Iron Horse,” “Here Come the Brides” and “Bewitched.” Carolyn is remembered for her enduring relationship with Allan as well as her generous and outgoing nature. She was able to make conversation with anyone she met from movie stars to bank tellers to hairdressers, many of whom became close and supportive friends. Cindy and Allan, Jr. relied on her for her free but valuable advice, she would offer wise counsel on any of life’s challenges from relationships to finances. Carolyn was also never afraid to get her hands dirty, taking on projects such as painting, wallpapering and tiling and making clothing for herself and her daughter. In addition to the San Fernando Valley and Calabasas, Carolyn and Allan flipped homes (which she never stopped cleaning) several more times, moving to Agoura Hills, San Diego, and Carlsbad, CA as well as Bullhead City AZ before Apple Valley. Carolyn Madvig is survived by her devoted husband Allan Madvig, who served in the Navy during WWII as a Motor Machinist Mate 3rd Class on USS LSM-335, an amphibious assault ship, and who then had a long career in auto sales including Plymouth, Buick and American Honda Motor Co.; their daughter, Cynthia Madvig, a business professional and actress from Los Angeles, CA; and their son Allan Madvig Jr., a business owner in Del Mar, CA. The family gratefully requests that any donations in her memory and in honor of Carolyn and Allan’s long romance be made to the American Cancer Society.

&#8220;All&#8217;s fair in love and war,&#8221; Allan Madvig said to Carolyn Smith on the roof of the ultra-modern W & J. Sloan furniture and décor building in Beverly Hills. It was 1954 and they both worked there, Carolyn as a cashier and Allan... View Obituary & Service Information

The family of Carolyn Madvig created this Life Tributes page to make it easy to share your memories.

Send flowers to the Madvig family.