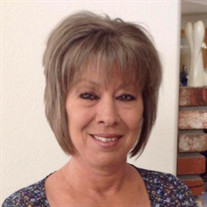 Deborah Ann Wingate, affectionately known as "Debbie" or "Deb", was born on January 6, 1962 in Fairfield, CA and passed away on June 19, 2017 in Colton, CA. Debbie was preceded in death by the love of her life, Rob Wingate, in 2010. They were married in 1987 and resided in Hesperia, CA since 1989 where they raised their two children, Jacob and Stephanie Wingate. Deb was a loving wife, caring sister, wonderful daughter, loyal friend and above all a proud, dedicated and loving mother to her children who she considered her greatest blessings. Debbie grew up in El Monte and Walnut, CA and was a 1980 graduate of Walnut High School. She went on to work for many years at General Dynamics-Pomona, which is where she met Rob. In later years she worked at the Housing Authority of the County of San Bernardino and then she became a real estate agent working with Keller Williams Realty in Hesperia. Deb had an impeccable work ethic and was always a pleasure to work with. Growing up Debbie played sports such as tennis and soccer but her real passion was softball. That love for the game carried over to her adult years when her daughter Stephanie played the sport herself. If Deb was not at the softball field watching Stephanie play you could find her at the track watching her son Jake ride and race motocross. She was always their biggest cheerleader and supporter in everything they did. Being a mom was her proudest accomplishment and she was an amazing one. For the last three years of her life Debbie battled cancer like a warrior. She never gave up, never complained and always continued pushing forward for her kids. Although she was a widow she still did what it took to be there for her children even thought she was dealing with her own difficult battle. Sadly we ended up losing Deb to this vicious disease but we know she is now pain free in the loving arms of Jesus and reunited once again with her beloved soulmate, Rob. She will be deeply missed but her memory will live on in all of those who knew and loved her. In addition to her two children Debbie is survived by her mother, Beverly Coley, brothers, Dean and Richard Coley, and sister, Pam Coley. She also has numerous in-laws, nephews, nieces, aunts and uncles that loved and adored her. Her dearest friends were like family too so this is a great loss for many people who had the pleasure of knowing her. The memorial service will take place at 9:00 a.m. on Monday, July 10, 2017 at Sunset Hills Memorial Park & Cemetery in Apple Valley, CA. A celebration reception to follow after the service on the premises.

Deborah Ann Wingate, affectionately known as "Debbie" or "Deb", was born on January 6, 1962 in Fairfield, CA and passed away on June 19, 2017 in Colton, CA. Debbie was preceded in death by the love of her life, Rob Wingate, in 2010. They were... View Obituary & Service Information

The family of Deborah Ann Wingate created this Life Tributes page to make it easy to share your memories.

Deborah Ann Wingate, affectionately known as &quot;Debbie&quot; or &quot;Deb&quot;,
was...

Send flowers to the Wingate family.