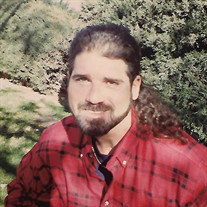 Michael “Mikey” Paul McCarty Jr., age 56, died of health complications on Sunday, May 21st, 2017 at his home in Apple Valley, CA. Michael was born on April 5, 1961 in Las Vegas. He graduated from Chaparral High School in 1979. Michael is best remembered as one of the top motorcycle racers in the Southern Nevada area competing each weekend in local M.R.A.N sanctioned events. In 1985, Michael suffered major brain stem damage resulting from a 3-story fall while working on a high-rise parking building under construction at Circus Circus Hotel & Casino. Michael is survived by his parents, Michael and Tami McCarty of Las Vegas, and Maryann “Sissy” McCarty of Leawood, Kansas; son Jason McCarty of Boise, ID; brothers Lance McCarty, of Las Vegas, Darrin McCarty of Leawood, Kansas and Glennon McAnany of Las Vegas; step-sister Kimberly Weyand of Las Vegas, NV; two granddaughters, Lillian Fae McCarty and Marilyn Faice McCarty; many aunts, uncles, cousins, nieces and nephews, personal aide Perry, and other close personal friends. He was preceded in death by his younger brother Cliff McCarty who passed 9 years ago. His family and friends will remember him fondly and miss him dearly. He was such a wonderful son, brother, father, and a friend to so many. Michael's memory will live in our hearts forever. No services have been scheduled. A “Celebration of Life” service may be planned for a later date. The family would like to thank everyone for all their kind support and condolences. Arrangements are being handled by Alternative AfterCare Cremation, Apple Valley, CA.

The family of MICHAEL PAUL McCARTY JR created this Life Tributes page to make it easy to share your memories.

Send flowers to the McCARTY family.