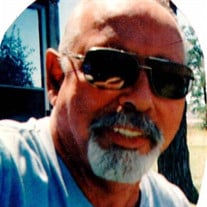 William Michael Owens-Kiser “Mike” January 26 1946-September 25 2018 Mike was born in Los Angeles, California. He lived mostly in Northern California in Klamath Fall, Oregon. Mike was raised by his Mother, Norma Ritchie (Kiser) and stepfather, Wolford Elroy Kiser “Roy”. Mike started his adult life by joining the Navy in 1964 until 1966. He served on the U.S.S. Princeton in Vietnam. After his time in service, Mike enjoyed Mud Bogging, fishing, racing, hunting and much more. Mike was excellent in many occupations; wielding, auto body work, mechanic and as a heavy equipment operator. Mike met his present wife, Rose, in Klamath Falls, Oregon. They have been together for 31 years and were married for 21 years. For the last 5 years they lived in Lucerne Valley, California. Mike is survived by his wonderful blended family: His daughters Kami, Vicki and her husband Bob, and Michelle. Sons John and Micheal Strain; 11 grandchildren and two great grandsons, a sister Karen, who lives in Klamath Falls, and his very best and longtime friend, Don Day. Mostly he will be missed by his loving soulmate, Rose Owens-Kiser. Services for Mike will be held on October 13 in Lucerne Valley and October 20 In Klamath Falls, Oregon. We will miss you “Papa” from all your grandchildren. Love always, your loving wife, children, friends and family.

The family of William Michael Owens-Kiser created this Life Tributes page to make it easy to share your memories.

Send flowers to the Owens-Kiser family.